Beer Is Good For Kidney Stone

Beer Is Good For Kidney Stone 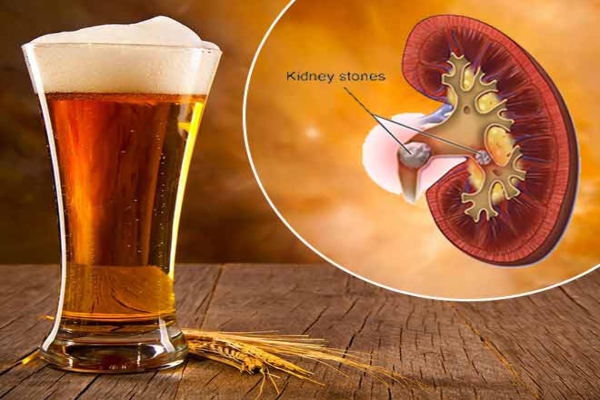 ‘Does beer remove kidney stones?’ Now that’s a question everyone is looking forward to an answer to! People tend to have a variety of opinions when someone claims that beer helps in kidney stones.

Everyone has their theories when discussing whether a beer is good for kidney stones or not. Before going in-depth on the question, it is essential to understand what kidney stones are.

Kidney stones are deposits of sodium and minerals that saturate in the kidneys and form small stones. These stones can either be dormant or moving. Stationary stones are less painful, but if they move and cause infection or get stuck, pain and other symptoms can make them a very chaotic disease.

In some people, kidney stones can be excruciating and then the questions such as ‘does drinking beer help with kidney stones?’ arise in mind. As much as beer lovers would love to hear a ‘Yes’ as an answer to this question, there is a lot more to discuss, for instance, the causes of kidney stones. What causes kidney stones are not easy to pinpoint since it ranges from genetic to lifestyle caused issues.

When someone says beer is good for kidney stones, firstly, it is vital to understand that consuming excess alcohol can damage kidneys and other body parts. Kidneys are the organs that filter substances that are harmful to the body, including alcohol. Beer is alcohol. So, is beer helpful in kidney stones?

Think this way, when too much beer is consumed, it will lessen your kidneys’ functionality of filtering the blood. There is another lookout for drinking beer or any alcoholic substance. It can also reduce the capacity of your kidneys to filter water. Due to this, the body can get dehydrated and disturb other functions as well. The liver is also affected due to alcohol.

While thinking about the impact beer has on kidneys, some people wonder, does beer reduce kidney stones or cause kidney stones? If it is true that beer is good for kidney stones, then what about other types of alcohol?

Well, firstly, beer does not directly cause kidney stones, but consumption does make you more prone to the risk of developing them. If you are thinking, is drinking beer good for kidney stones? Then understand that excessive drinking will lead to dehydration, and dehydration is the primary reason kidney stones are formed.

Beer can also increase the empty calories in your body and cause weight gain. Being overweight is another risk factor for developing kidney stones. Also, beer contains purine which causes a particular type of kidney stones to form.

So there is no direct answer to the question, ‘does beer help in removing kidney stones?’

There are a couple of things you need to keep in mind while consuming alcohol for kidney stones. Following are the main reasons that lead to people thinking that beer is good for kidney stones-

The second reason also has a valid explanation as to why it is a myth. As mentioned before, beer can cause dehydration, and when the human body is dehydrated, you are less likely to urinate. So instead of passing kidney stones, it will make it harder to move the stones. So, excess beer cannot be an apt choice of fluid to make the kidney stones pass. Drinking plenty of liquids will help with the stones but not beer.

If you are suffering from kidney stones, wondering ‘does beer help kidney stones dissolve?’ would be a waste of time. In reality, there is not much you can do to dissolve them faster. It is a process that will take place gradually and not in one instant. If you have a stone stuck in the ureter, it will take more than a month to pass, and beer won’t do any good. If it doesn’t after a month, you may not have any other option than to get it removed.

A simple take away is that beer is good for kidney stones that measure less than 5mm because urine might pass those but not necessarily. Prolonged and excess intake will harm rather than act as a cure because, in the end, beer is also an alcoholic substance.

So instead of trying these techniques after coming across ‘does beer help kidney stones?’ an article that supports the alcoholic substance, seek proper medical help. Many medicines are safer and even cheaper than beer to help you dissolve or pass the stones without any surgical process.

So make sure to seek a medical opinion before actually starting to drink or consume any sorts of alcohol. Also, keep in mind that only moderate beer consumption will prove helpful, but that is not mandatory. Your medical physician might recommend different treatment options and answer your question: does beer help kidney stones?

With all the advancements in medical research, pain management and removal of stones are possible more reasonably. Beer will help you lower the risk if consumed moderately, but it has specific side effects on the kidney and other vital organs of the body as well.