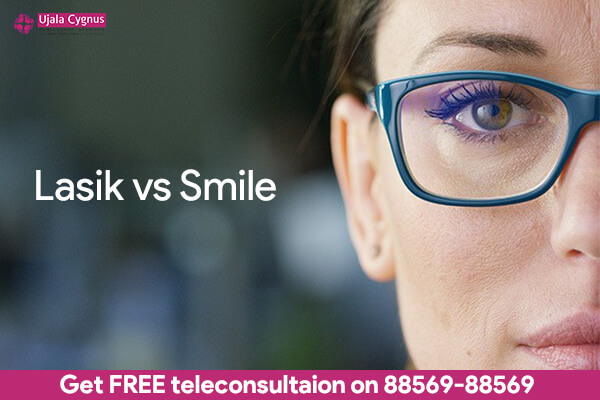 The method of using laser surgeries to correct refractive errors is still new. However, LASIK was approved by the Food and Drug Administration (FDA). Since then, related operations have been frequently used to improve people’s visual ability with nearsightedness, farsightedness, and astigmatism.

Any type of refraction error can be dealt with by using the LASIK technology. A newer version with fewer side effects is called SMILE. While comparing LASIK surgery vs SMILE, the latter is even less invasive. However, SMILE can work only for those who have myopia and, in some cases of astigmatism. Understanding the similarities and differences between LASIK and SMILE would help to understand both procedures and their benefits.

In the debate of LASIK vs SMILE, the similarities are seen in the cost, recovery period, side effects experienced, and range of refractive errors that can be corrected (20/40 or better).

Is SMILE better than LASIK? It might be for you. However, it is vital to consult with a proper eye doctor to determine the best procedure for you.

SMILE Procedure Vs LASIK, the laser treatments for refractive errors

For centuries, glasses or specs have been the best solution for blurry or double vision issues. They were succeeded by contact lenses, which became an ultimate way of dealing with refractive errors. Though lenses have a benefit here, they can be uncomfortable to wear, need maintenance and are not effective in correcting vision in the long run.

The game-changer here were the laser eye surgeries introduced by advancements in the medical field. It started with LASIK, which gave many people the joy of having a clear vision without wearing glasses or lenses. LASIK can improve refractive errors to 20/40 or better and is one of the most popular laser eyes surgeries to date.

LASIK is effective for most patients; however, it might not be for others. Thus, newer laser treatments were developed, and one of them is the SMILE process, and it gave birth to the question, ‘which is better LASIK or SMILE?’ in many people’s minds.

To understand the differences between SMILE and LASIK and the best for you, contact Ujala Cygnus.

What are the similarities and differences between SMILE and LASIK?

The surgeries using lasers to deal with refractive errors have evolved since the 1980s. The use of lasers saves time in the operating room, makes it less invasive, improves accuracy, reduces recovery time, and reduces the price. We try to note some basics and differences between LASIK and SMILE below. It is beneficial to know about the SMILE procedure vs LASIK before visiting a surgeon.

LASIK is an acronym for laser-assisted in situ keratomileusis. The procedure involves removing a small piece of cornea tissue with the help of a laser. Then, the piece is removed to reshape the cornea to refract the light correctly to the retina.

Each eye requires about 15 minutes, and generally, local anaesthesia is used for the surgery. Therefore, you are awake during the procedure. A day or two are needed for healing. Many of the patients are allowed to resume their work the next day. However, some activities should be avoided, like intense workouts like swimming.

Using a device, the eye surgeon makes a small flap in the cornea during the LASIK surgery. The device used might be a microkeratome, a machine-guided scalpel or a specialised femtosecond laser. Then they will reshape the cornea by removing some part of the corneal tissue using an excimer laser.

The refractive error you have will decide how much tissue needs to be removed and from which location. But LASIK can correct almost all types of errors, including combined refractive errors. Thus, to answer ‘which is better LASIK or SMILE?’ is surely LASIK if you have something other than myopia.

SMILE is an acronym for small incision lenticule extraction. It is based on LASIK and is a newer version of laser eye surgery. The SMILE procedure has been used worldwide for about ten years now. So, is SMILE better than LASIK? Of course, it is when you have myopia. In addition, SMILE does not require the creation of a flap to reshape the cornea.

There is not much difference between LASIK and SMILE setup. First, eye drops are given to you to numb the eyes, and the laser is meanwhile programmed with the map of your cornea. Then you are required to sit or lay down for 15 minutes per eye while the laser reshapes the cornea.

SMILE has about the same healing time as LASIK, but the risk of scarring on the cornea and detachment of the corneal flap is much less. In addition, there is no need to move from one device to another during the SMILE procedure because only one laser is used. Thus, the risk of dry eyes is also minimal.

Now that you are aware of the basics of LASIK vs SMILE, you might be able to make a more informed choice. Still, the best person to answer, is SMILE better than LASIK for you, is your eye doctor.

LASIK vs SMILE- The differences

Which is better LASIK or SMILE? Well, both use lasers to reshape the cornea and improve your visual ability. However, there are specific differences between these procedures, and they can help you determine the best option for your treatment.

Along with the differences between LASIK and SMILE, certain things give both the edge above each other. So the choice, which is better LASIK or SMILE, depends on your condition and preference.

LASIK vs SMILE- Which procedure is most suitable?

In LASIK surgery vs SMILE, the main point is that both are surgical procedures that can help treat refractive errors. However, both surgeries have restrictions on who can be a good candidate. As mentioned before, the difference between SMILE and LASIK is that SMILE needs no flap creation, so it has fewer side effects. However, SMILE has slightly more recovery period than LASIK.

It is vital to follow the post-operative measures of the doctor in both cases. It will ensure that the healing goes as per plan and complications are kept at bay. When you compare the SMILE procedure vs LASIK, both have less complication risk. However, LASIK is considered the safest surgical process.

Many surgeons specialise in LASIK because it has been around for longer than SMILE and is more popular. Mostly, they will suggest LASIK, but SMILE is an option in the play for those who cannot undergo LASIK.

You can learn about the success rates of LASIK vs SMILE at Ujala Cygnus today! We have experienced surgeons who can explain the differences between SMILE and LASIK in detail and aid in deciding on the procedure best suited to you.

For free teleconsultation with our doctor, call us at 88569-88569 or fill the form to share your problem.