Which is the best sleeping position during pregnancy?

Which is the best sleeping position during pregnancy? 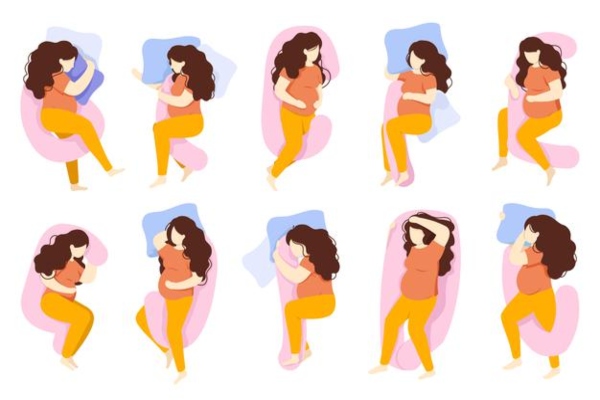 It is often difficult to have a sound sleep, especially with your baby bump, after your fifth month when your back is not in the best condition. Under such circumstances, many women find themselves wondering about the best sleeping positions during pregnancy.

One of the most dreading issues during pregnancy is sleep, which exceptionally starts from the third trimester. Some pregnant women are also found worried about certain body positions that might affect their health or fetus. According to a survey published by the National Sleep Foundation, it is found that approximately 78 percent of pregnant women endure trouble sleeping and 15 percent of women undergo restless leg
syndrome during their third trimester.

Some women report fatigue during pregnancy, particularly in the first and third trimesters due to the rise in progesterone levels and the effort to carry a baby. All these factors can affect their physical condition and worsen the sleep deprivation condition. However, there are some suggestions regarding the best sleeping positions during pregnancy that we will be discussing in this article.

Best positions of sleeping during pregnancy

During the first trimester, it is considered safe for a woman to sleep in any position she feels comfortable. It may be on her back or side or her stomach because, during the first trimester, the uterus has not grown large enough to interfere with sleep. Still, some hormonal changes, nighttime hunger, nausea and other related symptoms may interrupt her sleeping schedule.

As a woman reaches her second and third trimesters during pregnancy, sleeping positions must be reconsidered. It is the best idea to sleep on the left side during this time, which maximizes the blood flow to the uterus without putting much pressure on the liver. Though, a woman who has been experiencing hip or back pain during pregnancy may find that placing a pillow or two between the knees or bending the knees during sleep very comforting as that can help relieve the condition.

● Elevating the upper part of the body with a few pillows can help to reduce heartburn
● Raising the legs with pillows to help with swelling and leg pain
● Using a pregnancy pillow to cradle the body and provide additional back support can also be very helpful.

Sleep positions that must be avoided

Stomach sleeping- Many women love sleeping on their stomach, but pregnant women are prohibited from sleeping on their stomach, which may harm the developing fetus. However, they may sleep in this position until their first trimester, and there is no reason to avoid sleeping on the stomach as the uterus protects the fetus wall. As months pass by, women may find it challenging to cope with the changes throughout pregnancy, and find it difficult to sleep. So, based on their condition, they may sleep in any position with or without pillows and women may also occasionally sleep on their stomach without the fear of harming the baby.

Back sleeping- Lying on the back might seem comfortable when a woman is not pregnant but in the third trimester or from the 28th week of pregnancy sleeping on the back may put extreme pressure on the blood vessels that carry blood to the uterus. The pressure exerted may decrease the fetus’s oxygen supply and increase the risk of unpleasant symptoms such as dizziness and even heartburn. Under such circumstances, adopting the best sleeping positions during pregnancy can be a great idea that can help resolve most undesirable conditions.

● Elevating the upper part of the body to reduce heartburn- Some women may find it extremely challenging to sleep during pregnancy due to heartburn and uneasiness. They may try sleeping in a semi-sitting position or try out the right sleeping position during pregnancy under such circumstances. If that does not alleviate your heartburn situation, you may also take some over the counter antacids only after consulting with your doctor. Overall during pregnancy, you must always try to consume less oily food before going to bed.

● Try out healthy meals- During the first trimester, some women may wake up feeling very hungry. In that case, to avoid this feeling, you must consume protein- rich food that can reduce appetite like fish, nuts, peanut butter or meat before going to sleep.

Sleep can broadly impact a woman’s health and well-being, yet that can be very challenging to get with so many pregnancy-related difficulties. Women can also try out a range of techniques and sleeping aids apart from trying out the right sleeping positions during pregnancy to improve their sleep quality. These ensure that you are trying to set up such a sleeping position that is safe for the developing baby’s health.